The AM is located on the medial side and posterior side of the thigh. It has been suggested that it should be considered as having three separate anatomical and functional components:

a. The front or anterior part of the muscle, arising from the ischiopubic ramus (where the ramus of both pubic bone and ischium meet).

b. Fibres from the pubic ramus are short and horizontal, and insert along the linea aspera just medial to the gluteus maximus.

c. This is the hip flexing and adducting part of the AM.

a. The fibres from the ischial ramus are more vertical and lateral, and these insert via an aponeurosis into the linea aspera, being innervated by the posterior branch of the obturator nerve3.

b. This is the adducting component of the AM.

a. This is the posterior part of the muscle.

b. Due to the common nerve supply (sciatic nerve) between this portion and the hamstrings, it is often grouped together with the hamstrings as a hip extensor (sometimes called the ‘4th hamstring’4).

c. It arises out of the ischial tuberosity, from a well-defined osseous origin located medial to the semimembranosus and conjoint tendons5.

d. Fibres run vertically downwards as a thick and fleshy mass of coarse bundles, and insert onto the adductor tubercle via a rounded tendon.

e. This is the hip extending part of the AM. 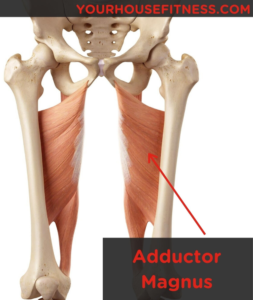