NOTE: Research Articles are informative and fun to read. However, they can have varied results so you must learn what works best for you. 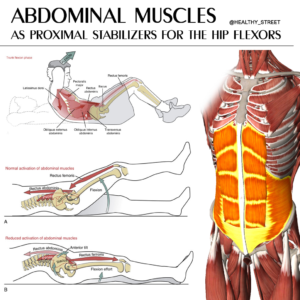 Function
– The hip flexors advance the leg when walking or running and lift the leg when going up steps
– Efficient execution is highly dependent on the stabilizing forces provided by the abdominal muscles
Straight Leg Raise
– Fig A shows two primary hip flexor muscles generating a force to lift a fully extended lower extremity
– The relatively long extended leg places very large force demands on the hip flexor muscles that likely exceeds 10x the weight of the leg
– With weakened abdominal muscles, attempts at flexing the leg often result in an unwanted anterior pelvic tilt and associated excessive lumbar lordosis (Fig. B).
– The unstable pelvis and lumbar spine are pulled toward the anterior femur—into an anterior pelvic tilt—because the pelvis and the lumbar spine are more free to move than the leg.
– To prevent this, the abdominal muscles produce a posterior tilting force that stabilizes the pelvis (Fig. A).
– As is shown in Fig. B, the unwanted anterior tilt of the pelvis simultaneously increases the lordosis in the lumbar spine.
– For this reason, excessive lumbar lordosis is often a clinical sign of weak abdominal muscles.
Sit-up
– The iliopsoas (and all other hip flexors) and the abdominal muscles share the responsibility of performing a basic sit-up
– For a person with weak abdominal muscles the hip flexors immediately take over the action—most notably by the exaggerated anterior pelvic tilt and increased lumbar lordosis—as the pelvis and trunk are rotated forward and upward.